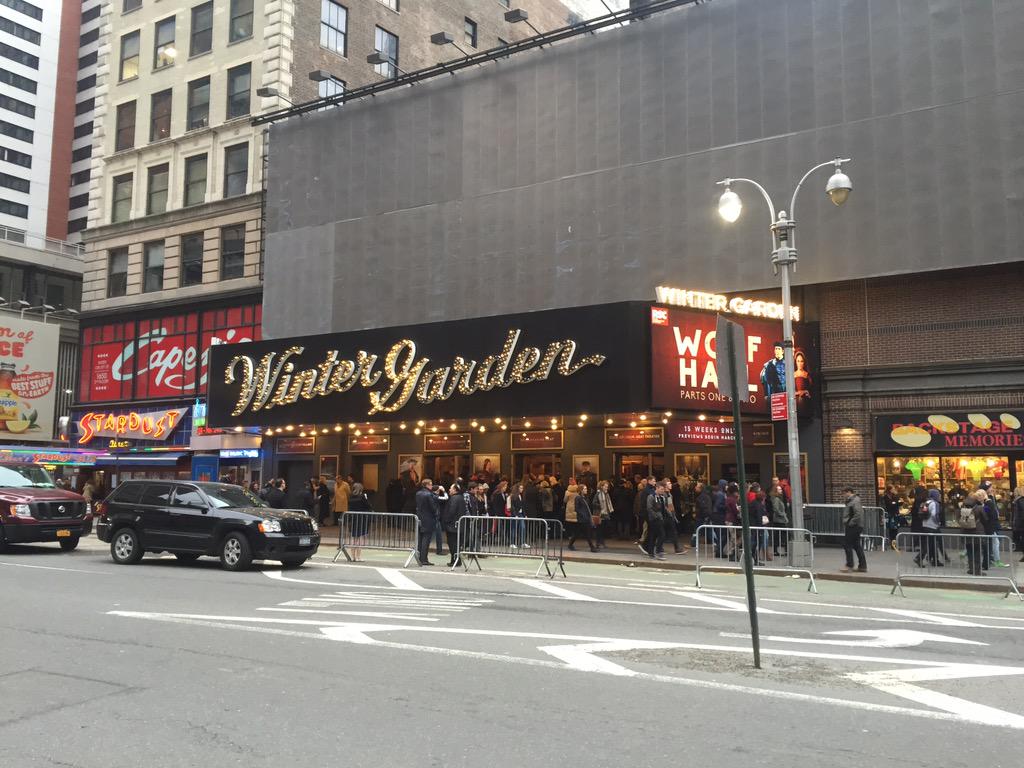 Similar to the seventies Heinz Ketchup commercial that said “Anticipation is making me wait,” the stage adaptation for Hilary Mantel’s Wolf Hall for months was making me wait.  For many months, I had eagerly awaited the stage productions at the Winter Garden Theater of Mantel’s novels, Wolf Hall and Bring up the Bodies, its sequel.  When I visited London a couple of months ago, I wanted to see the Royal Shakespeare Company, but because of travel time to Stratford, I decided to forgo the trip.  I was familiar with their work as a result of seeing them, in collaboration with another theater company, perform Shakespeare’s Anthony and Cleopatra last year. When I read about their pending repertory performance on Broadway, I knew that the quality of the performance would be extraordinary. I became so excited about the upcoming performance because I love classical historical drama and because all the shows that I have seen in London have been either captivating or riveting. I expected no less from the Royal Shakespeare Company’s production of Wolf Hall. Last week before seeing the stage adaptation of Wolf Hall, I decided to read the novel’s first two parts twice to gain a better understanding of all the characters in the story.  Without having a working knowledge of the history, keeping track of all of the characters was proving to be difficult. Upon reading it the second time, the characters became less obscure and much clearer. After reading parts one and two of the novel, Wolf Hall, I watched the first episode of Wolf Hall on PBS.  As a result, I became even more enamored with the text.  I was so enthralled that I googled many of the major players of this historic drama.  I wanted to ensure that I had an accurate understanding of the major historical people and events discussed.  Mantel, in many respects, keeps well in tune with the actual historical events of the life of Henry VIII; however, she refashions Thomas Cromwell to make him much more palatable than the version depicted in A Man For All Seasons (I read that in high school), allowing us to focus less on his malfeasance and more on his fidelity to the King and to Cardinal Wolsey.

Hillary Mantel’s novel in two parts tells the story of how Henry VIII requested annulments from both Catherine of Aragon and Anne Boleyn because they were not able to give him a son as heir to the British throne. To help one understand the historical aspect of the story, Henry VIII married Katherine who was his brother’s widow.  He claimed that his brother never consummated his marriage and that his brother never touched Katherine, therefore he was free to marry her.  But after eighteen years of marriage, she failed to give him a son that would be heir to the throne.  As a result, he petitioned the Pope, via Cardinal Wolsey, for an annulment.  The pope refused over the protestations of Henry VIII. He married Anne Boleyn anyway and later had her executed for adultery, incest, and treason (she failed to produce a son).  Thomas Cromwell was his “right hand man” who helped the King accomplish his goals of annulment and subsequent marriages, all the while the King never achieved his primary of goal of having a male heir to the throne!  Little did he know that he was to blame!!

The novel was adapted for the stage by Mike Poulton.  Make no mistake, this play focuses on Thomas Cromwell and his relationship to Henry VIII and to Cardinal Wolsey. The other characters are essential, but the play gives great insight into Cromwell’s actions in relation to the Catholic Church and in relation to those around him. The play had its original runs in Stratford preceding its run on the West End in London before coming to Broadway. Ben Miles plays loyal Thomas Cromwell, a lawyer, Nathaniel Parker plays King Henry VIII, and Lydia Leonard plays the fearless and shrewd Anne Boleyn, who is later convicted  and subsequently beheaded for treason, incest, and adultery –  charges that are historically thought to be false. I saw each part of the play on separate days. The theater appeared to be sold out for the first part, but was only half full for the second part.  Even though the first part ended superbly with the foreshadowing of Jane Seymour, I surmise that either the length of the play or the subject matter deterred people from watching the second part.  The running time for each part is about two hours and forty-five minutes. Additionally, if one does not know the story of Henry VIII, he or she might have become confused by the twenty-four major characters and by about another twenty minor characters. As a result of reading the novel and watching the PBS Masterpiece series, I understood the content of the play. My suggestion for those who are seeking to see the play is to research some basic history of Henry VIII, Thomas Cromwell, Cardinal Wolsey, Anne Boleyn, Catherine of Aragon, and Jane Seymour. If one knows the key aspects of their lives as they relate to the British monarchy, understanding the play will not be as arduous. If one takes some time to research the history, then disappointment will be unlikely for the acting is superb and the writing keeps one engaged all the while already knowing how the drama is going to unfold and end. Even though I knew the ending, I remained riveted by the story and it maintained my engagement. Lydia Leonard was outstanding in her portrayal of Anne Boleyn. One should see the play for her dramatic portrayal.  Her performance will leave the average theatergoer wanting more from her, yet knowing that the story ends with Jane Seymour, the subsequent wife of the King after Boleyn. Don’t be dismayed, rumor has it that part three of this novel is coming! Maybe a drama will follow.

As a result of my prior knowledge of the novel and of British history, I recognized the action and many of the lines of dialogue in the play that were taken directly from the novel. For example, Cromwell discusses that in the Bible there is no mention of purgatory, no pope, no relics, etc.  He also discusses, William Tyndale, a leader in the Protestant Reformation. These references in the play are used as a basis for King Henry VIII forming the Church of England. Because of the enormity of Wolf Hall– nearly six hundred pages, the stage adaptation has only the most salient points of the novel and of British monarchy history.  Without starting from the beginning of the novel, which details Cromwell’s humble beginnings, the play periodically hints at Cromwell’s beginnings as the son of a blacksmith. The stage adaptation does detail, as the story progresses, the deaths of Cromwell’s wife and daughters from sweating sickness as well as the life of his only son. The sentiments of each of the major characters are accurately portrayed.  One can see that Anne Boleyn’s shrewdness is depicted accurately as well as the coy and subtle coquettish behavior of Jane Seymour, Henry VIII’s third wife. The great adaptation allows us to follow the trajectory of both Cromwell’s life as well as Henry’s VIII’s life and his wives.

Creatively this dramatic rendering does much with less. The set design features high cement towers that serves many purposes.  The lighting design and sound designed helps the audience to determine the actual location of each scene.  At times, the play is set on the Thames River. The sound of the water as the characters are on the boat gives a strong sense of location.  Other times, the characters are indoors and there is often a fireplace that gives us understanding of the location. The scenes at the Tower of London where Anne Boleyn and others were beheaded is dark and has a sinister atmosphere.The creative team does a splendid performance in its decisions of costume design. The costumes in the play are reminiscent of both the fifteenth and the sixteenth century. The costumes help one to be able to distinguish the characters from each other. Their power and their wealth were both displayed through their clothing. During sixteenth century England, velvet, wool and silk became sought after fabrics. The play’s costume fabrics are elegant and display the opulence of the monarchy. The hats that they wear also depict the era.

Although this play does not have many special effects, its strength lies in the writing and in the acting that are used to maintain your interest. Sometimes, plays use many techniques to either make a production greater or to mask otherwise weak productions; but, this production is great at its core without all the possible technology and elaborate set design. It’s set in the fifteenth and sixteenth centuries, a time when all of the advances were not on the horizon. There are no anachronisms that are out of tune with the setting of this historical drama. Perhaps in the future, we will see more dramas like this.

Please get your tickets to Wolf Hall– both parts!  This is a limited run of fifteen weeks. Even if you believe that the play will be difficult, watching this historical drama will not likely leave you disappointed.  You will be both engrossed and educated at the same time. Why not give it a try! As I finish this post, the PBS drama awaits me! Yes, I still want to watch the drama unfold, even though I know the entire story.  The reviews for that series have been on par with Downton Abbey. What can I say? I love both great writing and great theater.

Starting in July, Lin Manuel Miranda’s Hamilton, a historical musical, will be appearing on Broadway after a successful run at the Public Theater in New York City.  I was dilatory in getting a ticket and I have had no success at the Public’s ticket lottery.  I hope to get a ticket for this upcoming Broadway production. I’m expecting it to be as great as Wolf Hall. Reputation is everything! Comments welcome.