It’s rare to see a play in which the traditional conventions of casting (race, gender, age) are cast aside (pun intended). The Elevator Repair Service (ERS),an experimental theater in NYC, did just that. Known for taking literature and /or document based writing and dramatizing them, the ERS performed an unorthodox rendition of William Faulkner’s The Sound and the Fury. It was directed by John Collins. The title The Sound and the Fury, takes its name from a line in Macbeth in which Macbeth says “…it is a tale/ Told by an idiot, full of sound and fury/ Signifying nothing.  I saw two of ERS’s past productions, Gatz, a word for word performance of The Great Gatsby performed in its entirety, and Arguendo, a play based on a U.S. Supreme Court case on obscenity. I was thrilled late last year when The Public Theater announced that The Sound and the Fury would be part of its current season of performances.  Because I thoroughly enjoyed the previous performances that I saw with ERS, I waited expectantly to see another great performance. Additionally, because I had not read The Sound and the Fury, I knew that I needed to read it. Although I was familiar with Faulkner’s style of writing, I knew his complexity would be an impediment to thoroughly understanding the text. Unfortunately, I did not finish the book by the date of the play.  As a result, when I saw the performance, I had a difficult time identifying and following the many characters. I then decided to complete the text and see the performance again. I can totally say that I enjoyed the performance much more the second time because I was thoroughly familiar with all of the characters and with “the stream of consciousness” with which the story was written. The opening scene of the play orients the audience to one of the major events taking place during the story. There is a traveling band with a banjo playing and everyone is dancing and enjoying themselves. The scene repeats itself during the show to illustrate for the audience the background of this travelling show in the community in Mississippi.

Faulkner’s stream of consciousness throughout the novel makes understanding the plot difficult.  It is not told in chronological order, and Benjy (called an idiot for his developmental delay), the first narrator, remembers events out of sequence. In the first chapter, we find out that Benjy keeps focusing on the relationship that he had with his sister Caddy. He is reminded of her and begins to cry because he hears the word caddie spoken by some golfers nearby. This causes him to reflect on various events concerning her and how he felt around her. Benjy is now thirty-three years old, and it is his birthday. Although he is his age chronologically, the text says that developmentally he has been three for thirty years. Luster, Frony’s (Dilsey’s daughter) adult child, is put in charge of Benjy. He looks after him and becomes his primary caregiver. No one wants to be bothered with Benjy because he is always making noise and crying. He needs constant care and attention. He cannot talk, but he obviously feels emotions like sorrow and happiness.The only way that he can express himself is through sound which appears meaningless to others. Only Caddy treats Benjy with love and affection. Benjy is reminded of his sister often. Caddy, unfortunately, illegitimately becomes pregnant, (before chapter one ) runs away, and later marries a wealthy man who is not the father of her child (this information is given out of sequence).

Quentin, one of the Compson brothers, goes to Harvard (the family sold a  piece of their land in order to afford to send him to Harvard) where he is mistakenly accused of sexual impropriety which reminds him of Caddy’s actions.  Quentin, distraught over his sister’s pregnancy, tells his father that he committed incest by having sex with Caddy (how incredulous). He did not want her to suffer either blame or humiliation. Quentin (suffering from his own neuroses) fantasizes about death, and ends up committing suicide.

Caddy’s daughter is raised by her family and is named Quentin (in the text she is often called Miss Quentin), after Caddy’s brother. Caddy, now estranged from the family, desires to see her daughter and provides economic support to her. Miss Quentin absconds with the money that Jason has hidden for years.

Jason, Caddy’s brother who is perpetually angry, takes Caddy’s money for himself, while giving only a little of it to Miss Quentin. Jason convinces his mother not to take the money because it comes from a “whore”. The mom  does not know that he covertly cashes the checks regularly and stashes the money. Miss Quentin, because she is ill-treated by Jason, sneaks out of the window to be with her boyfriend. The family believes that this type of behavior is in her blood, therefore they do not expect anything more from her.

Dilsey, the maid, has raised the Compson children. Through all of these characters we get glimpses into the prejudices that we have toward one another. Even the members of Dilsey’s church evaluate the guest preacher on Easter sunday by the way he looks. In the end, Dilsey “endured” living with the Compsons.

The twelve member cast is exceptional.  Many of the characters play multiple parts. some of the most notable are: Susie Sokol, who plays Benjy, Ben Williams, who plays Luster as well as other characters, Daphne Gaines, who plays multiple parts- most notably Jason, Greig Sargeant, who plays Dilsey as well as others, and Caddy played by Rosie Goldensohn and Tory Vazquez. The characters put much vitality into their roles.  All of the emotion from each character is infused within the story. The characters have the accents and the mannerisms that accompany the temperaments of the characters. Through the rhythm of their language and their gestures, the characters transport the audience back to the the early 1900’s and to the roaring twenties, although the 20’s were anything but roaring for the Compson family. 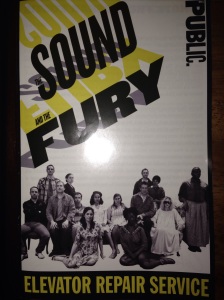 The set and the props are inclusive of a family home with all of the southern comforts. It is not elaborate, but it reflects the cozy home atmosphere, in spite of the dysfunctional family.  It includes fourteen lamps (possibly for a technical issue to allow the audience to focus on certain illuminated performances, while others are less in focus), a Persian or oriental rug (possibly to depict their former status, nineteenth century furniture, a large radio of the time period, and a large stove for heating purposes in front of which Benjy often sat for comfort.

This performance is worthwhile seeing, with one caveat.  It is essential to have a fresh reading of the text. Without knowing the story plot, one is likely to be both lost and confused because of the stream of consciousness and because of the inability to decipher the cast members because of the interchangeability of the characters and the unorthodox casting by the Elevator Repair Service. It runs through July 12th, 2015.