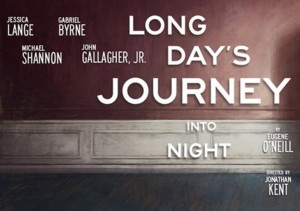 I am an eternal optimist. I tend to believe that with time, self-reflection, forgiveness, and prayer that most of life’s hurts can be resolved. But why does trauma destroy some lives while enriching others? Why do some people acknowledge traumatic events while others pretend that they are not happening? But what happens when life is too painful and we lack the wherewithal to accept what we cannot change? What happens is Eugene O’Neill’s Long Day’s Journey into Night (considered to be his magnum opus), a play that explores the Tyrone family’s ceaseless pain and the family’s emotional unraveling. Hurts that have not healed can cause family turmoil, the destruction of the family, and devastating family dynamics. What happens is drug addiction and the incessant drinking of alcohol to numb the pain.  Published posthumously because O’Neill did not want it published during his lifetime, this play is considered to be semi-autobiographical.  I am a lover of classic literature, for its themes endure for many years past its publishing date and speak to timeless ideas. I seized the opportunity to see the Roundabout Theatre’s production of Eugene O’Neill’s classic. The Roundabout Theatre Company’s cast includes: the incomparable Jessica Lange (Mary Tyrone), the seasoned Gabriel Byrne (James Tyrone), Michael Shannon ( Jamie Jr.), John Gallagher, Jr. (Edmund Tyrone) and Colby Minifie (Cathleen, the servant). This play under Jonathan Kent’s direction is three hours and forty-five minutes in length (the action takes place during one day and night) and I felt almost every second of every minute. This play is terrifically written, but it’s staging left me wanting more. Each family member’s detachment from each other and each character’s intermittent display of affection is depicted through the sudden fits of intense rage.

Although the performance has its strong points, it however, struggles in the acting which at times appears to be contrived. Lange, Byrne, Gallagher, Shannon, and minifie are all superb, but the fault of the performance is its direction. The entire cast appears to have been directed to have bursts of raging emotion that seems to be forced and disconnected from the rest of their actions. Maybe the director wants to show the family’s dysfunction through these fits of rage contrasted with slight tenderness. Whatever his reasons for his direction, the emotion rarely seems to be a natural evolution from each conversation. Without reading the text, I am not sure whether O’Neill wrote the stage directions in that matter. The intense bursts of rage seem unnatural and “over the top.”

The acting almost fails to draw the audience into the emotional pain. Does a play have to be melodramatic for the audience to feel the characters’ pain? The scenes in which Mary explains the reasons for her pain and the final scene evidencing the devastating effects of her hurt (morphine addiction) are the best scenes in the play. Mary in a morphine induced stupor carries her wedding dress, the symbol of the happiest day of her life. At that point Lange’s performance rivets me and I feel Mary’s emotional pain and its devastating effects of leaving her stuck in the past. Unfortunately, the play ends at that point.

From the beginning of the play, through its dialogue, the family’s pain is evident. As the action unfolds, we are given information in pieces that explains the circumstances of Mary Tyrone’s absence and her subsequent return. The family refuses to accept the truth, and Mary lives in the past, for she says the present is the past and the future is the past. Mary holds onto her son Edmund because he was conceived to heal her pain from the loss of her other son. Various family members either intentionally or unintentionally cause immense pain to Mary which causes her to not face reality or Edmund’s possible demise from Tuberculosis (consumption).

There is a fog horn that blows with the  wind; it metaphorically shields Mary from her pain. Fog horns normally sound in foggy weather to warn ships of dangerous impending fog. The continuous bad weather mimics the family relationships. The danger ahead is Edmund’s possible impending death.  Mary loves the fog, but hates the foghorn. The fog metaphorically distracts her from facing her pain, but the fog horn’s purpose is to warn her of danger, but she refuses to see it.

One aspect of the script that I noticed is that although other characters are referenced in the story, none of them are part of the action. Most people seek out family and friends to help them work through traumatic events. Mary, however, isolates herself because of her husband’s premarital affair that resulted in a scandal, real or imagined. Mary’s difficult labor, the death of her other son, Edmund’s illness, her husband’s parsimony, and Jamie’s philandering all cause social withdrawal. Naturally, people have the tendency to shy away from others when they need them most. It appears that Mary Tyrone did just that!

This plays continues until June 26, 2016 at the American Airlines Theatre.